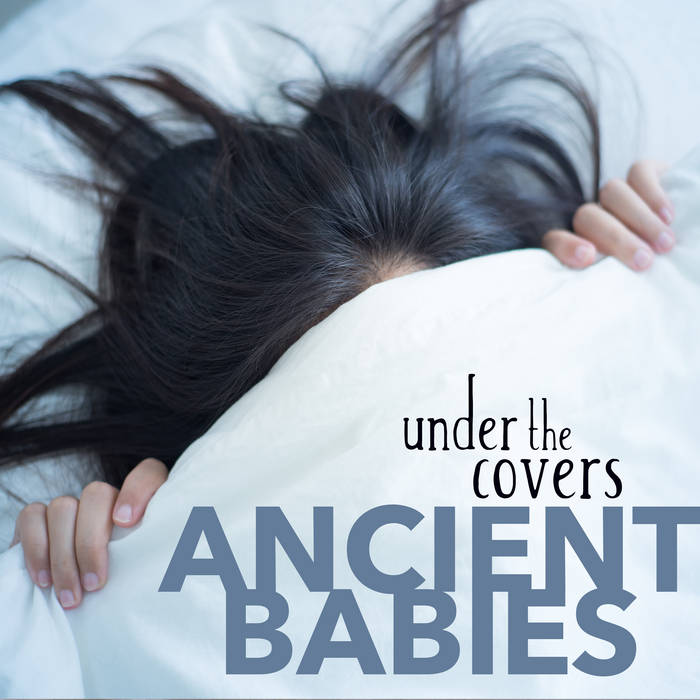 Usually, when a band covers a song, they try to make it just like the original. So isn’t a thrill when a cover transforms a song into something new? Think of Devo’s cover of “Satisfaction”, which twists a rock anthem into quirky robot-pop. Or - do you remember Dread Zeppelin?

In Under the Covers, Ancient Babies lovingly reshapes five pop hits into their own brand of theatrical, progressive dance rock. Much of the music is changed, and they rewrote the lyrics for good measure. Each old song is recognizable but sounds brand new!

Come as You Are - The grunge anthem becomes a Euro-dance hit that opens out into a cheerful new coda. Its lyrics are now about the wonder and tragedy of Kurt Cobain.

Dark Horse - Did you understand what Katy Perry was singing about? Me, neither. Well, now it’s sung from the perspective of a real-life Dark Horse - Donald Trump. He sings to the wealthy, selfish men who created Fox News to make themselves even richer… and the blowback from their propaganda. For good measure, the Babies have added a dreamy, creepy fantasy middle section that builds to a bombastic finale. And an intro that references “Comfortably Numb”.

Working for the Weekend - Does anyone know what this 80s rocker was originally about? Not us! So we felt free to make our version about working for the weakened. Another rock anthem becomes a dance hit, with new words about how everyone’s getting woke and working to stop inequality.

Der Kommissar - After the Fire’s cover of Falco’s original starts with a beautiful introduction featuring a delayed guitar. It’s so lovely that the Babies just sampled that and made it into the whole song.

My Heart Will Go on - The Babies covered this song without once listening to the original. It’s now a pensive seven-minute piano dirge that ponders the possibility of life after death during an age of science.

The album was recorded in the attic of a house in New Jersey, an apartment in Brooklyn, and a secret room in an office in New York. Ben played many things, Ian played guitars, and Ian and Ernesto added vocal harmonies. Bryan Russell co-produced and mixed it in Nashville. Mastered by Alex Saltz at APS Mastering.

Track Name: Come as You Are
Come as you are, as you weren’t,
Though we wanted you to be.
To the end, we’d pretend
That your pain could set us free.
Each guitar you destroyed
Shone a light into our void.
Flannel shirt, how it hurt
We converted you to Kurt.
You were Kurt.
Did that hurt?

Come. Come to us. Did you feel
If we loved you, you would heal?
Heal the child, heal the scars.
We would tell you who you are.
Would success fix your pride,
And would it clean the mess inside?
Come on the ride.

Hey, is it fair, that we made you the one?
There was nowhere to run.
And we sold you that gun.

Come as you were. We await,
Finding strength in quiet hate.
With your screams, with your rage,
you restored a dying age.
Every mall, every car,
And every jock came As You Are.
What would you be?
You were free.

Come as you are! Come as you are!
Come be a star! Look you’re a star.
Come build a new age
Of bubble gum and rage.
Yay, USA.
Track Name: Dark Horse
This is my reign. I am succeeding.
Come meet the creature you’ve been feeding.

You had a scheme to get yourself a little more.
Go out and scream, “We can just ignore the poor.”
Now here I am. I’m your new reality.
Something that you couldn’t see,
Something hiding. That was me.

So you want to shape opinions,
Bend the truth until it breaks.
But you never saw me rising.
Yeah, you never knew the stakes.
Are you ready for, ready for
A civil war, civil war?
Democracy, democracy: never coming back.

I speak my mind. They don’t like me. I don’t care.
A better you: I say the things you wouldn’t dare.
And don’t believe it could never happen here.
I don’t share your little fears.
I’ve been waiting all these years.

So you want another million.
Only weak men feel remorse.
But you never saw this building.
I’m gonna win it like a dark horse.
Are you ready for, ready for
A leader you must adore
America, ‘merica
Not comin’ back.

Oh, can’t you see the glory we’re creating?
Like a dream where we don’t even hear them when they suffer, when they scream.

Oh, the people who deserve will rule forever, without fear.
We’ll never have to listen to those women. No one cares.

Oh, the little girls will smile at us and giggle.
And the boys will see us as their idols, as their rivals.

You thought that I could never happen
Check it out - I beat the odds.
Isn’t this the thing you wanted?
We will live like Roman gods.
Are you ready for, ready for
A dinosaur we’ll restore.
The demons of ‘33:
They’re comin’ back.
Track Name: Working for the Weekend
Everyone’s watching to see what you can’t do.
Everyone’s hoping you’ll pull through.
Everyone’s seein’ the world’s not really fair.
Everyone knows it’s time to share.

Everybody’s working for the weakened.
Everybody needs a second chance.
As we learn, our caring’s only deepened.
Get a three-day weekend like in France.

You want a piece of my heart?
Just gotta show me a chart.
And if the data is true,
I’ll start fighting for you!

Everyone’s dancing, shouting in the street.
Everyone’s turning up the heat.
Everyone’s seeing the problem’s not your fault.
We’re getting ready for an assault!

Everybody’s started volunteering.
Everybody’s doin’ what is right.
People want to cheer instead of fearing
Everybody wants to join the fight.

You say the system is fair.
Just take a look over there.
You better hear what we say.
The world is changing today!

Your world is falling apart?
Come have a piece of my heart.
It’s time to open your eyes.
We’re tearing off the disguise.

You’re seeking peace in the streets?
You better strap on your cleats.
Oh yeah we’re planting a seed.
We’re understanding their greed.

‘Cause when the people unite.
They’re gonna know what is right.
We’re going on the attack.
On yeah we’re taking it back.

Bandcamp Daily  your guide to the world of Bandcamp